The home is finished now and ready for living. Marika and Tony were gracious enough to do a questions and answers session to give people a little better understanding of what all went into Project Eppstein.

(Q) What unexpected things came up?
(A) We ,Marika Broere and Tony Hillebrandt had a building inspector from Indiana coming to the house, before we bought the house, who did a very good inspection, we received a  report with a lot of pictures. This was for us not the first house we renovated and most things the building inspector noticed we also had already seen.
Yes, and even then there are always unexpected things! A couple of examples we did not think of and did not foresee:
A new septic tank had to be installed.
Water drainage around the house, to prevent the walls from soaking up water from the soil.
Sagging ceiling in the master bedroom, construction mistake from when the house was built. We need to sister structural beams and put in a new ceiling.
Floors in 2 bedrooms and part of the hallway: the concrete needed to be replaced. We just heard from Jon Eppstein ( the son) that the 2 rooms and hallway floors  were not good from the moment his father and mother built the house.

(Q) What was the most difficult thing to get done?
(A) The most difficult to put in the house and extra cost was to put in a split level airco/heating system.  We were looking for a system to protect the house in the summer and winter.  There is a good original floor heating system but we know summers in Michigan can be humid. Like in other important FLW houses and older museums  we decide to have climate control in the house. This is not just to protect the house (the number one reason!) but also to enjoy the house when we or our guests are staying in the house. The hard thing was to get all the lines in place without taking out the ceilings.

(Q) What did you change with the home?
(A) The inside and outside of the textile blocks were treated with a especially designed Sherwin Williams stain. In the past the building blocks outside had been repaired. This was necessary because outside rain water had gotten into the blocks and with freezing weather the blocks, especially around the small windows had cracked, and fallen apart. The new stain lets the block breathe but will not allow water to get inside.

We changed the new master bathroom. In the past there had been a tiny old acrylic shower insert, like you still can find in cheap motels. There was no fan just for the shower area , no storage and not enough electric outlets.

We changed almost all the electrical , most windows now have double glazing.

New hard wire alarm system installed following the latest electric code.
Heating from oil to propane, an in-ground propane tank is now in the garden and it is very hard to tell where the location is, allmost invisible.
Almost every water line is now a PEX waterline.
A lot of woodwork needed replacement, like cabinets in bathrooms needed a complete exact rebuilding by the carpenter Bill Heffernan (he worked in the house for more than a year).
When the flat roof was redone, tapered hard insulation was installed so the water would not stay at the roof.  Extra roof scuppers were placed.

(Q) Where did you get the tiles in the bathroom?
(A) We bought the tiles at Battle Creek Tile & Mosaic Co. After listening to our wishes very carefully, they took us to the storage in the back and helped us find very old tiles, that were still in dust covered vintage boxes. Their guess is that the tiles that we chose are from the fifties.

(Q) Where did the stove come from?
(A) We found the stove on Kijiji. Canada . Private people were selling it. We paid and then found out that it only just fitted in our van, with maybe a quarter inch space left! The electrician had to make some adjustments. It works great.

(Q) What kind of boiler and a/c units and fireplace inserts did you choose?
(A) The installer choose the EMI , Retro Aire ductless split air conditioning/ heating system.
Our small Navien tankless water heater runs at propane ( no more oil tanks) With this system it is possible to heat up all the radiant floors, 2 showers and the dishwasher at the same time.

(Q) The furniture?
(A) Some of the furniture we already had in our collection, such as the Bauhaus chairs in the multi purpose room, and the Hans Wegner chairs. But we had to buy beds. We made sure they suited the house and the time period by buying vintage danish teak beds. The dining room chairs were our luckiest find: the are very rare H.W. Klein #250 chairs, manufactured by Bramin. Incredibly they once belonged to Dorothy Eppstein as we later heard from her children, but they were never in this house. After her divorce she had bought them in an estate sale, when she lived in an apartment in Kalamazoo. We feel they look as if they belong in the house.
(Q) When did you decide to get books and where did you acquire them from?
(A) Most books come from our private collection. We purchased some 20 to 30 on Ebay and Amazone on the subject of FLW, novels, history books and reference books, as well as DVDs about FLW.

(Q) Have you met other Frank Lloyd Wright owners besides the ones at the acres?
(A) Yes we have. The seller’s real estate agent Fred Taber introduced us to John Meyers who owns the Mc Cartney House in Kalamazoo. We owe it to him that he told us about the excellent Allback red linseed oil floor wax. It was hard work, but the floors in the living room have come out incredibly beautiful.
We have also met other FLW owners at the FLW foundation dinner in NYC. With some of them we are still in touch.


(Q) When did you go to Columbia University to view the FLW archives?
(A) In September 2017 we went to NYC to the Moma for the FLW 150th birthday exhibition, the annual dinner of the FLW Building Conservancy and to visit the Columbia University Archives. They opened the Eppstein House files for us, with original blueprints, drawings, and designs, from which we purchased 8 or 10 copies.

(Q) What was the one thing that you like most about the home?
(A) Even after having owned it for 18 months now, it still feels like an adventure to be there. Everything about the house is exciting. It is deceptively simple. The way natural light comes in at different times of the day, how low it is set into the hill, the outlook into the surrounding nature, the then low - then high ceilings, the materials, the historic value, the subdued colors. We can go on and on. It will never become boring. Even the Eppstein children, who have lived here longer than any person alive today, are still intrigued by the house.

(Q) Anything else you can think of?
(A) Having spent so much time on restoring the house, and having built a large addition to a country house ourselves once (with little means and little money), we came to appreciate Mr and Mrs Eppsteinn greatly. They were no builders, they were lay people, who learned how to build during the process. Their lack of knowledge shows here and there in the details (for instance where the window frame doesn’t fit properly on a low wall in the back room). They had their jobs, raised five children, and built a house with their own hands. An impressive achievement.


(Q) Are you happy that you did it?
(A) Very happy. We saved a precious piece of cultural heritage from becoming lost. We fell in love with the house from the moment we found the listing on the Internet. We had been looking for a summer cottage at a lake in Canada for a couple of years, or a building plot. We did absolutely not plan on buying property in the USA. We are so happy we chose to buy this house instead. It has enriched our lives in many ways. We have learned a great lot about FLW, and we have made new friends along the way.
at December 18, 2017 9 comments:

Here are a good number of photos that show the finished interior of the Eppstein residence. It looks like one last post will be necessary as there is a lot of information to share and it takes time to gather it all. Look forward to seeing the Eppstein residence in an upcoming issue of the Wall Street Journal.
Well, it was a great journey and though it seems like it may be coming to an end.... this is just the beginning. The restoration is ending but the new life that has been breathed in to the home is going to live on for a very long time.
One interesting thing you will see is very large painting. The owners commissioned the artist to make this painting for the home.
I should also mention that you will be able to find the home on airbnb, so if you would like to stay there for a few nights or longer then check it out Eppstein on AirBnB
On Dec. 7th a professional photographer came in and took about 700 photos. Yes, seven hundred.
These photos you are about to see here are were not taken by a professional photographer. Just thought I should disclose that. Here you go.

Even Project Eppstein. On November 7th, 2017 a post will be made here with lots and lots of pictures and information detailing the amount of work that went into the Eppstein Residence. I will cover as much as possible about the many updates, repairs and the trials and tribulations that the new owners have gone thru. It has been a long journey and a good one. In the end the new owners will have cemented their names in the history of The Acres and the Eppstein Residence.
As of today the only work that remains is cleaning, installing furniture, artwork and curtains.
The new owners have purchased so many books that will compliment the home and fill its shelves for years to come and the picked up a vintage stove from the era that is a great looking addition to kitchen. Stay tuned..... the end is nigh. 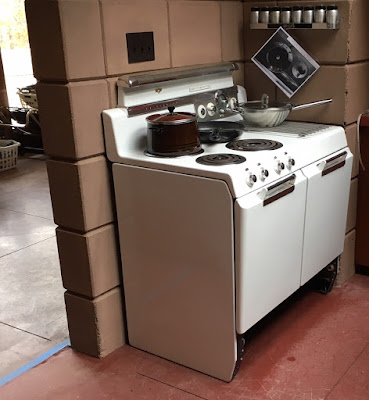 Joe Farkas, who is not just a great house painter, but also an amazing artist, gave the new owners an incredible gift: a bench that he carved from a single log of red oak. They have nicknamed the bench "The Eppstein House Bench" and it will stay under the carport!
Joe was simply giving a gift of appreciation for the new owners and what they were doing with the house at The Acres. Joe is a jack of many trades with metal working being high among his many talents.
I can say that having personally seen the bench it is beautiful and it is comfortable....it is also extremely heavy. 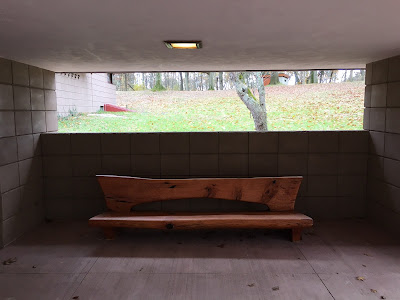 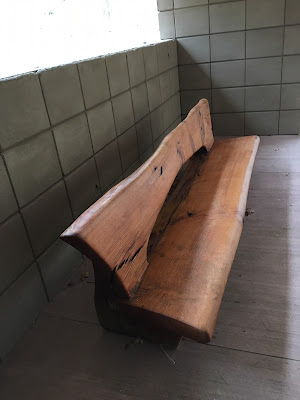 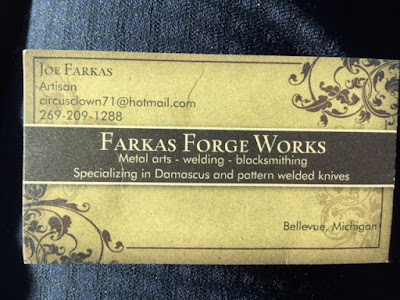 The home is finished now and ready for living. Marika and Tony were gracious enough to do a questions and answers session to give people a ...